skip to main | skip to sidebar

Its December, finally I am doing something that I have put on hold for quite sometime. Elsewhere I have posted that the Monitor Audio is my second set of speakers I bought way back in 1982 when I was in Dublin. I was using it for awhile but upgraded to the amazing RTL3. It was used by my son until I gave him a pair of Missions!. So this set was put and kept aside for quite awhile.. about 5 years and survived an extensive major renovations to the house. And the reason why there is water damage to the speakers.

Chipboard and water don't mix! The water will be absorbed and the chips start to expand and rot... the affected area will be the bottom of the speakers and the back and sides. I have one side badly soiled. The drivers are fortunately still intact and plays beautifully when I tested it last Saturday. The sounds reminded me the good old times when I was in Dublin which prompted me to restore the speakers for old times sake.

I have taken some pictures and will document this process until completed. This is a preliminary posting, via a program found in Google Play... God bless Android! Till the next update...
Posted by jazzy939 at 1:19 AM 2 comments:

What the heck is that?

I did not realised till I checked days ago that there were no postings in 2012 and its November!!!

The reasons being, I was busy with a new job and bigger responsibilities, not bigger paycheck!

Then a new job with a bigger paycheck! Still nil time for the hobby.

Came renovations of the house, major! 6 months staying in a rented flat till completed. It is about to be completed with my own lab/workshop and a dedicated audio 'room'! Definitely worth the wait, yessss!

Thank you for dropping by. Will update with pictures... ;)

A gamble that paid off- An old gem found.

I recently acquired my very first 'commercial' power amp. The reason being, first it's being made by 'Technics', it's a 'classic' or may be antique as it was part of a system that was launched with my favaourite singer album way back in 1980 if I am not mistaken! It may also serves as a reference to my DIY power amps.. hehe.

It was sold by a nice chap through mudah .com. I did not even test the unit at his place as he assures that if it is not working I can return the unit. I however insisted that the unit be power up. Once I saw the red power LED lit up followed by a faint click of the speakers protection relays, the deal was sealed.

The unit now sits right at the bottom of my 5-tier audio rack. Signals are controlled by another gem that I got which is a Yamaha AV amp in pre-amp mode. The most neutral and natural preamp I ever heard. More on this later. Sources are my usual DIYed CD Transport mentioned earlier and the superb Behringer Ultramatch PRO SRC 2496 DAC.


Due to this set up, my existing reference and favourite Technics SU-A900 MK2 has been taken out temporarily, giving this new line up to prove it's 'worth'. Honestly I got it cheap... ;)

Eventhough the power amp is rated at a 'puny' 40Watts per channel it can really drives my RTL3 floorstander at a very loud levels! The most striking characteristics that I found is that the details of low end bass at lowish volumes are excellent! Full bodied, powerful and fullfilling, the kind of bass that satisfies a 'basshead' like me. Due to this new found characteristics, I have been doing a lot of late night listenings with much enjoyment without the higher volumes of day listenings!

So for those with a small listening room and a 'lil bright sound system, this power amp if you could lay your hands on, might just be the ticket in getting that 'sound' that has been eluding you if you know what I mean! 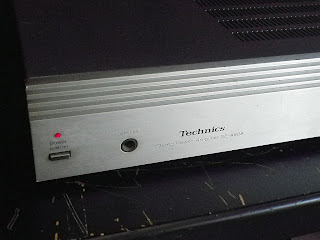 Sitting 'quietly' and 'unobstructively' at the lower most tier of the audio rack..
Posted by jazzy939 at 9:41 AM No comments:

The time now is:

Where are the 'peeps' comin' from?

My Reference Amp (used to..) 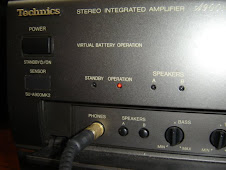 One of my analogue sources:

Interesting places to check out: